Philippine Children, I Found a Hero

This blog is a little unusual for two reasons: I am on location volunteering rather than scribing an article from my journal at home; and the theme is children, one in particular, instead of a wild near miss adventure. Okay, there have been many near misses in my two months here; like the one of three cows that broke free from the shepherd and ran onto the highway when I was driving the tricycle at 60 kms per hour. There were several near misses with oncoming traffic; like trucks, buses, tricycles, or motorcycles with no headlights at night. Rather than pull out the several close calls on the highway stories from my journal, I want to  mention these little girls before I introduce the star of the blog.

This little cutie lives close to where I am staying, although she is very shy, she is pleasantly curious. This little girl has many kids around her and it is apparent that she happily plays daily. 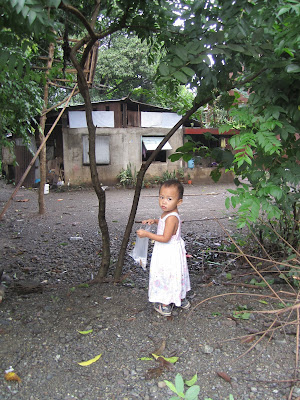 This next poor girl has a very tough life. I saw her in San Jose, Nueva Ecija laying on some bags of empty plastic bottles. With no shoes/sandals and a filthy body, it was evident from her slight frame and tired eyes that food did not come easy. I did not have any food with me so I give her 50 pesos and gestured for her to eat something. 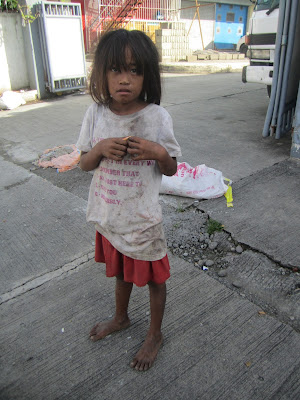 There are many such children around the Philippines, and the world for that matter. Witnessing child poverty is heart wrenching, we as adults should be ashamed of ourselves for not prioritizing this urgent global problem.

If there is a bright side to this rant it is my star of the blog........picture not included so as not to single out anyone in her family. This girl, who will soon be 10 has impressed me as a selfless individual who would make anyone proud with her conduct. I have witnessed for 2 months how much she helps her older sister with her 3 kids....like a second mom. It seems that she is always on duty, although she attends school. I have had the pleasure to see her almost daily and although her English is just beginner level, and my Tagolog is non-existent, we seem to be able to communicate on the basics.

I decided a couple of weeks back that she deserved to be treated for dinner and have some time to really enjoy herself. Tonight was our night; I took her the 25 kms to San Jose where she had a choice of Greenwich, Chow King, Jolli Bee, or Mcdonalds. She picked the latter, of which I never go, unless I am in a country where the food is just too revolting. When we walked in the door her face lit up when she felt the air conditioning inside the restaurant. I never give it much thought that this was her first time in a Mcdonalds, she was in awe of the environment and the crowd within. Wide eyed, she kept looking around like she was at Disneyland in California.

She awkwardly tried to express what she wanted to order and we finally got the menu figured out, we were just minutes away from the true hero coming out again, this time in McDonald's. I opened up the Big Mac box and dumped her fries in the lid, she immediately started putting half of the fries back in the sleeve, those were going to be for her niece and nephew. She smiled as she ate her fries and gazed around the restaurant. I knew quickly that she was not going to eat the Big Mac then, that was for her older sister, the mom of 3. I asked her if she wanted an ice cream sundae and she smiled even wider. When I stopped and talked to a guy, something I always try to do, she was right behind me; she thought I would leave her.

I got her to sit back down and kept an eye on her as I ordered the sundae's. When I got back to the table and give her the ice cream I said, "say thank you", she said, your welcome ! There is often humour when there is a language barrier. This young lady was so proud to take her bag of offerings out of the restaurant, I was so happy that she was happy. In a country where most people expect the foreigner to dig into her/his pocket often, it is nice to make a connection with someone who does not expect much and also thinks of sharing. Some would argue that an introduction to McDonald's at 10 years old is not such a great idea, and I would have to agree. All I can say is the hero picked the location and she was so happy.......